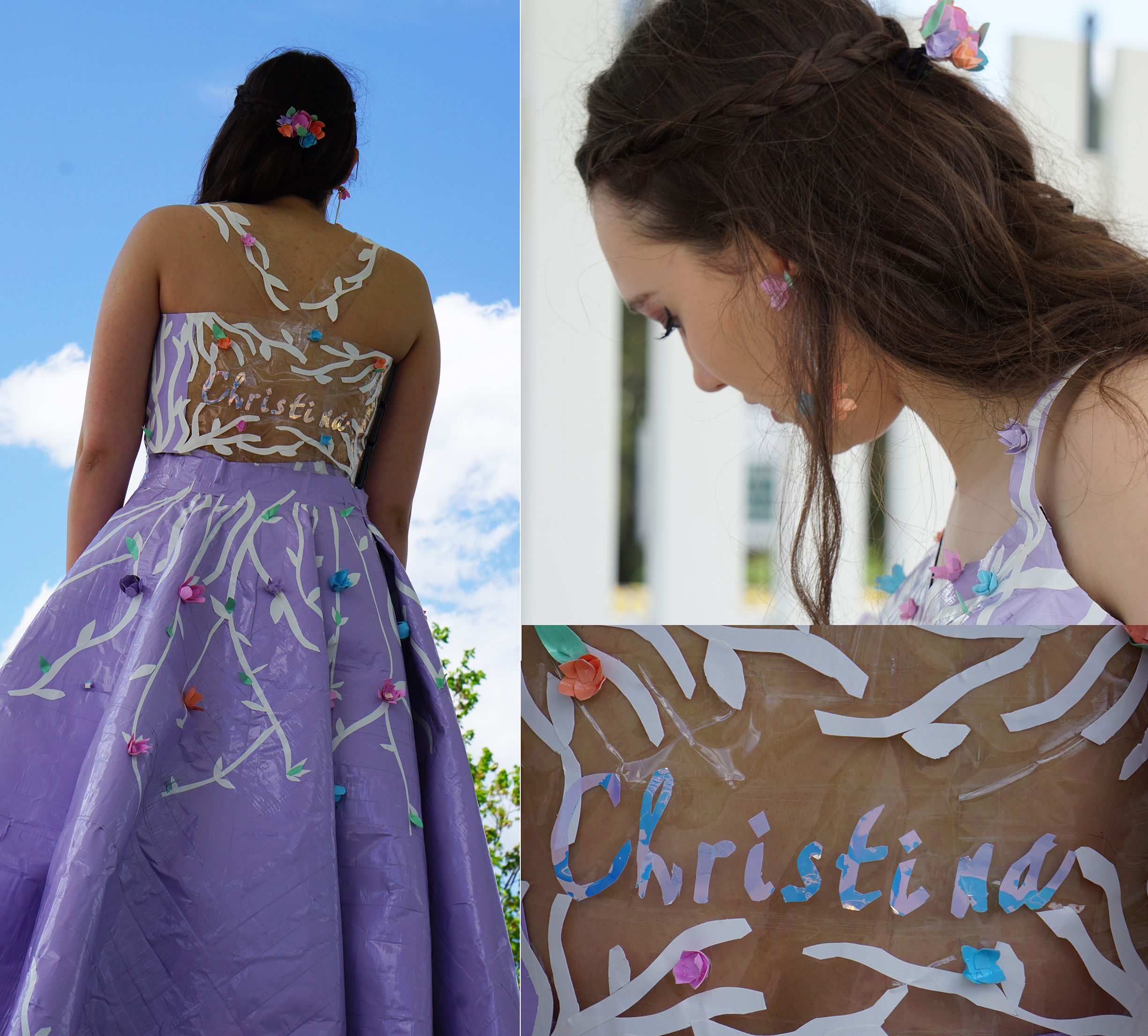 If a Loudoun County high school girl wins a unique design competition, she could be awarded a $ 10,000 scholarship. Regardless of how it turns out, she sticks to her passion for fashion.

17-year-old Christina Mellott made this dress from adhesive tape for the “Stuck at Prom” scholarship competition. The dress can be transformed into three different looks by changing and removing the overskirt. It took 80 hours and 36 rolls of tape. (Courtesy Nicole Mellott)

In addition to the dress, Christina made matching accessories, including tape flower earrings and headgear. The back bodice of the dress had a transparent board that had her name (hand cut) on it with iridescent tape. (Courtesy Christina Mellott)

Christina works with other materials, of course. This dress is made from sequin fabric that adds shine and shine. “The dress had strings of lights sewn into the dress with a remote control that said ‘Wow!’ Could light up easily, “said Mellott.

During Christina’s sophomore year of high school, she made these dresses for herself and four friends. Each dress was based on a princess theme and was tailored to each girl’s personality. (Courtesy Nicole Mellott)

Christina made a red sequin dress with one sleeve for a theater event at the Kennedy Center. It was a last minute creation that she did in a day. (Courtesy Anna McDonald)

Christina’s friend Julia was the leading actress in her school play “Singin ‘in the Rain”. She made this dress from a light, flowing crepe fabric. Her low waist dress followed popular styles of the 1920s. (Courtesy Christina Mellott)

This is one of the articles Christina designed for her website. It’s a fleece pink sweatshirt with a sequin stripe in the middle. Her mother Nicole Mellott loved it so much that it is now her favorite shirt. (Courtesy Christina Mellott)

Combine 36 rolls of duct tape with 80 hours of exertion from a Loudoun County, Virginia teenager and what do you get?

“I’m very excited. I’ve been doing clothes and stuff for a few years now, but it’s my first time using duct tape. And it’s for a scholarship competition, so it’s been a really cool experience so far,” said 17-year-old Christina Mellott .

Mellott is a finalist in the Stuck at Prom Scholarship Contest, which awards a winner with a US $ 10,000 scholarship following public voting.

Mellott, an aspiring senior at Freedom High School in South Riding, said she was 13 when she started sewing and designing clothes.

“I would love to go to college and study fashion design and have a career,” said Mellott.

How to make a dress from duct tape

“I put the tape on itself and started making it in rectangles and making the rectangles bigger and bigger and treating it like a yard of fabric,” she said. “It can be a little tricky when the tape sticks to itself or folds incorrectly or sticks to my hands.”

Mellott’s creation has an adjustable and removable skirt that allows it to transform into three different looks. “I hope my chances are good,” she said. “I like the sheer panel. It added a nervous, unique touch that I haven’t seen on anyone else. “

Mellott has two siblings and a lot of support, she said, from her parents.

“My mother will wear some of the things I made for her,” Mellott said. “My dad is going to help me with my Etsy business and deliver things.”

In fact, the young seamstress has two stores online. One shows clothing designs, the other sells snuggly accessories for guinea pigs.

“We are just very proud of her that she made it. She always took responsibility, ”said Papa Ben Mellott. “She decides what she wants to do and she just does it. … She is just a wonderful girl. “

Everyone can vote for their favorite creation in the “Stuck at Prom” competition. You can vote once every 24 hours until June 28th.

By signing up here, you will receive breaking news and daily headlines in your email inbox.

© 2021 WTOP. All rights reserved. This website is not aimed at users in the European Economic Area.