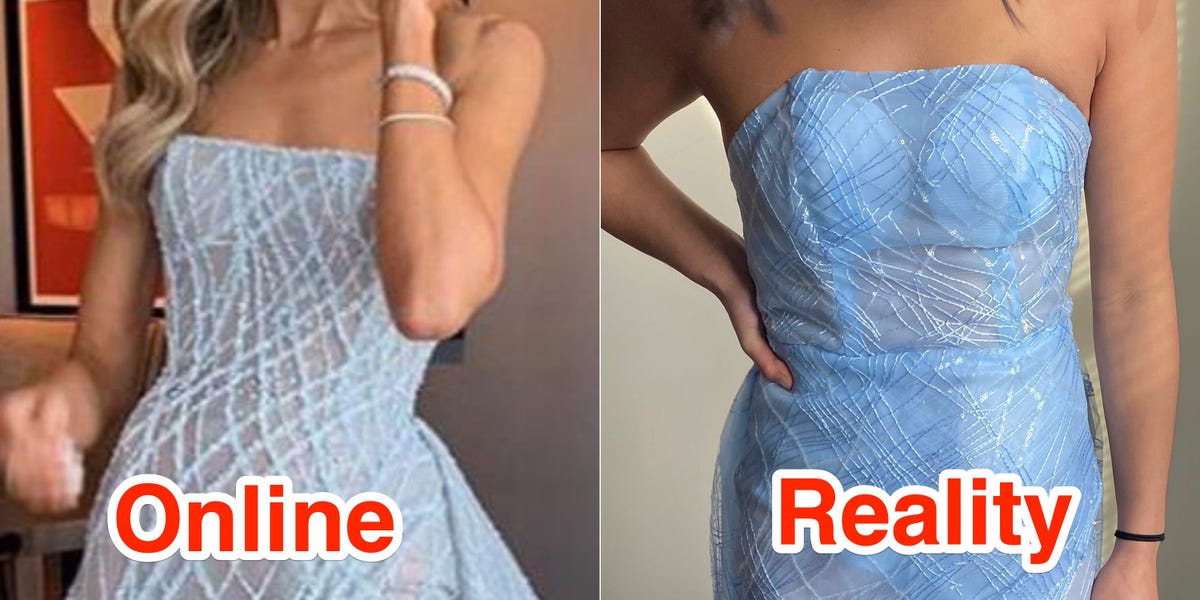 TikTok user Anna Dinh sparked reactions on the platform after sharing a video about a bridesmaid dress that she said looked like a different dress online.

Since sharing the video in December 2020, Dinhs TikTok-Post has received 2 million views and more than 400,000 likes.

In January, Anna told Insider that she and her sister Lynn were looking for bridesmaid dresses online in early December 2020 ahead of Lynn’s wedding, which she plans to have in August.

Lynn said that she found and fell in love with a light blue dress from a seller under the username hxhdress on DHgate.com. DHGate.com is an online marketplace based in China that sells wholesale items such as clothing, shoes, and home accessories.

The listing for the dress the sisters ordered describes the dress as a “baby blue mermaid ball gown” with a “detachable train, high-side split” and “sequin lace” details.

Photos of the dress from DHGate.com.

Lynn told Insider that her wedding theme was “Starry Nights” and would have a blue color scheme – which is why she and her sister were initially attracted to the dress they saw on DHGate.com.

Lynn said that she also liked that the dress had a detachable skirt as she thought it would give her bridesmaids a chance to switch to a different style before the wedding reception.

After ordering the dress, the Dinh sisters said they waited about a month and received the dress in the mail in late December 2020. They said when they took the garment out of the box it was the “opposite” of what they expected.

Pictures of Anna and Lynn Dinh showing the dress ordered.


“When I picked it up, it was super cheap. It was only fabric and had no pillow. Everything was transparent. You could even see the cups,” Anna told Insider. “Honestly, it fit well and hugged my body, but everything else was horrible. There was no glitter and it felt like it could tear if I just bent down.”

Lynn told Insider that she contacted the seller via a message on DHGate.com on December 23, 2020, shortly after the sisters received the dress.

Lynn said that she asked the seller for a full refund, referring to the retailer’s refund policy which, as stated on their website, states, “Buyers can return items for a refund if they are not as described or have quality problems through direct communication with the seller. “

“You can see from the pictures that the quality is just not right,” Lynn told Insider.

A photo of the dress online (left) and what the dress looked like when Anna Dinh tried it on (right).

According to screenshots Lynn shared with Insider showing her message with the DHGate.com seller, the store owner initially responded to Lynn’s complaint about the dress by offering to refund her $ 40.

The bride-to-be, who spent nearly $ 200 on the dress in December 2020, sent a series of messages back to the seller, writing, “I want a full refund. The dress is not what you described.”

The seller then used her screenshots of the message exchange to tell Lynn that they could “negotiate” for a partial refund of more than $ 40.

Lynn told Insider that after exchanging messages with the online store seller in January, she received a refund of $ 140, which was $ 53.84 less than what she paid for the dress in December 2020, excluding the Shipping.

The DHGate.com seller declined to comment when reached by Insider.

Anna and Lynn Dinh told insiders that they are still looking for the perfect bridesmaid dress.