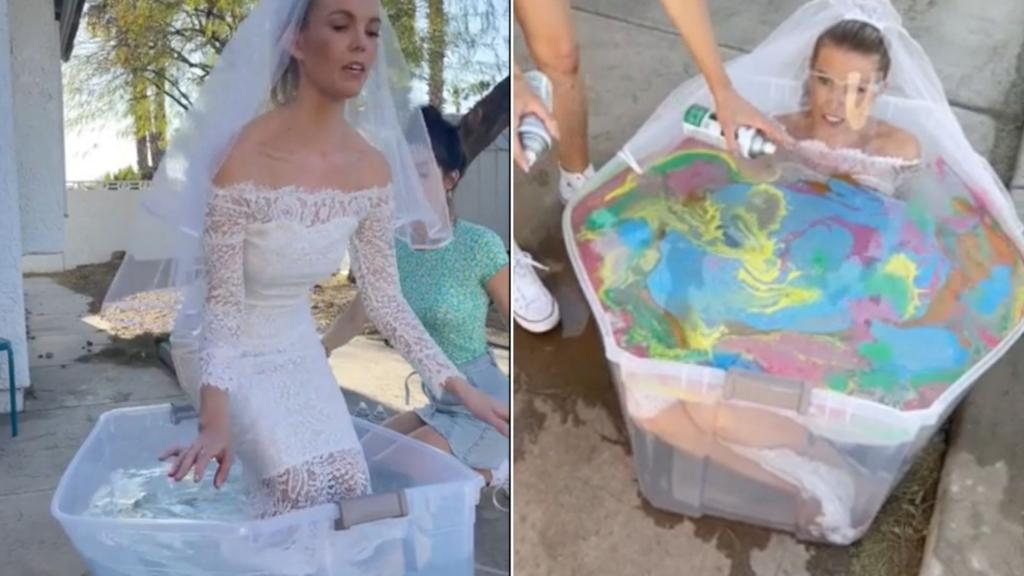 A video showing the bizarre overhaul of a bride’s wedding dress was popped on Reddit.

The strange footage shows the woman diving up to her neck in a large container of water while wearing an intricate wedding dress and a lace veil.

Watch the video about the bride’s bizarre makeover

After the woman has put on protective goggles, an “artist” sprays the dress with a multitude of different colors.

“This is going to be so pretty,” you hear the bride say after applying the pink color at the beginning.

“I’m so excited, my wedding dress will be so unique.

The bride steps into a container of water at the beginning of the video. Image Credit: Reddit

“If he sees me walking down the aisle, he’ll love it.”

After the artist starts spraying blue suit into the water, the bride says, “This can be my something blue!”

After spraying pink, yellow, green, orange, and blue paint into the water container, the bride waits a minute for the colors to develop before lifting herself out of the water.

The result is a multicolored wedding dress with swirls of color against the white.

However, Reddit users weren’t quite as enthusiastic about the end result as the artist.

“Well, this is one way to ruin a beautiful wedding dress,” said one user.

Added one more: “What the hell is that? Why is she wearing it? Why all the colors? It looks like she wore the dress when she was preschool and the three year olds won. “

A third said, “She has to marry a five-year-old.”

Wrote another: “‘It’s breathtaking!’ ‘It is wonderful!’ No, it’s none of those things.

“It looks ridiculous. Why would you think it is a good idea to do this while wearing the dress? “

But not all of the comments were that critical.

“Honestly, if they chose less / matching colors, it wouldn’t be as bad as an alternative dress!” said one.