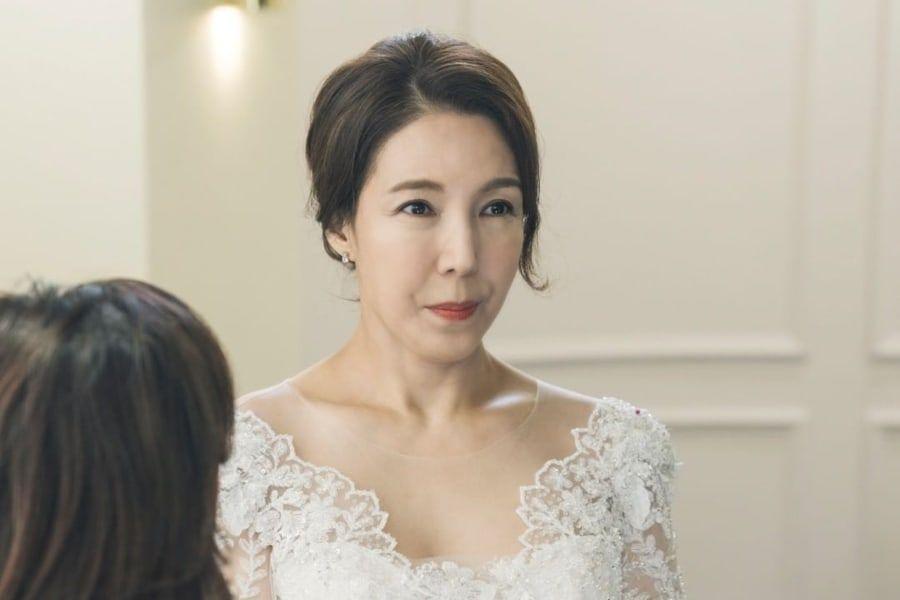 TV Chosun gave a sneak peek of this week’s episode of “Love (ft. Marriage and Divorce) 3”!

The makjang present is a multi-season drama about three ladies of their 30s, 40s, and 50s whose lives are upended after they uncover their husbands are having an affair.

On the earlier episode of “Love (ft. Marriage and Divorce) 3,” Lee Si Eun (Jun Soo Kyung), her fiance Web optimization Ban (Moon Sung Ho), and her two youngsters Park Hyang Gi (Jeon Hye Received) and Park Woo Ram (Im Han Bin) went to a ski resort collectively. It was heartwarming to see the 4 of them getting alongside like a real household, and expectations are excessive for Lee Si Eun and Web optimization Ban’s upcoming marriage ceremony.

The newly launched stills present Lee Si Eun making an attempt on a marriage costume. Lee Si Eun, who often wears plain outfits, seems completely dazzling in a white mermaid costume with a plunge neckline and lacy particulars. Her pal, who’s the designer, seems delighted and expresses her envy about Lee Si Eun’s upcoming marriage ceremony with Web optimization Ban. Nevertheless, as steered within the preview for the following episode, issues won’t go as easily. Web optimization Ban’s father is in opposition to their marriage, and curiosity is mounting over what lengths he’ll go to to be able to cease it.

This scene was filmed in February, and Jun Soo Kyung put quite a lot of thought into discovering the right costume for her character. After a lot dialogue together with her stylist, she determined to go for an extravagant costume as a substitute of a easy one since Lee Si Eun was marrying Web optimization Ban. The employees who noticed Jun Soo Kyung within the costume could not assist however reward her refined magnificence, inflicting the actress to smile brightly.

The producers commented, “Along with her superior physique and mature appearing, Lee Si Eun takes the result in present Lee Si Eun’s transformation. Please look forward to the published with assist for Lee Si Eun’s happiness.”

How does this text make you are feeling?