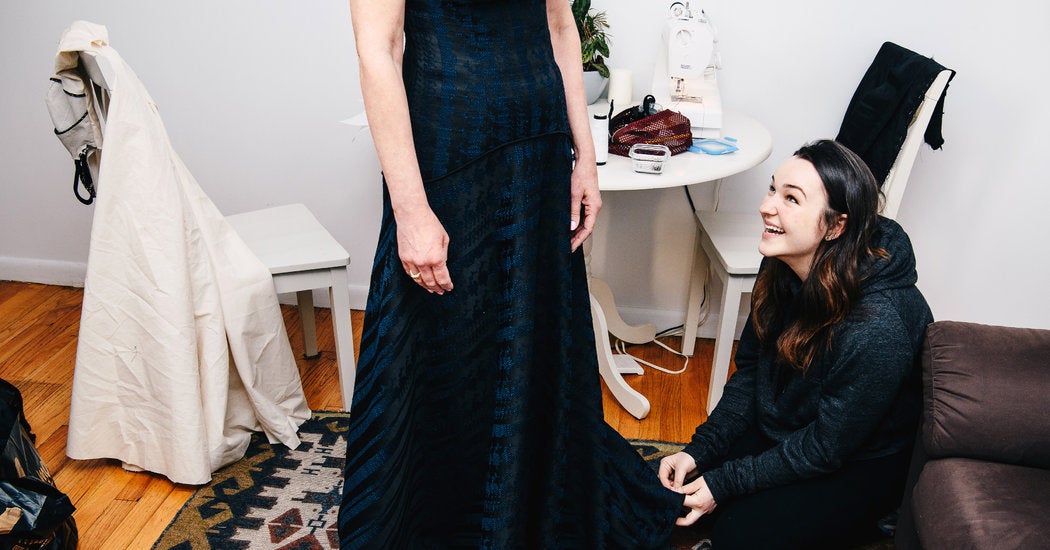 A Met Gala dress was created in a walk-in apartment on the sixth floor in the East Village of Manhattan, in a room no wider than a railroad car. First in the mind of designer Katya Ekimian, a 19-year-old student at the Parsons School of Design, and then from meters of fabric that had previously been piled in bags in a corner.

At the end of last month, in Ms. Ekimian’s apartment, which faces the inside of the building but is flooded with light, paper patterns such as blueprints were scattered, sheets of fabric were stacked and muslin toilets were hung on the back of her bedroom door.

“I had to move my furniture to lie down on the fabric and cut the circle skirt,” said Ms. Ekimian, interrupting the sentence with a booming, light laugh that spice up all of her statements. “You don’t have to be special anywhere to do something you’re proud of.”

The dress – slim and full-length, made from black and blue brocade with rope detailing, a dropped waist, and an ornate neckline – isn’t for everyone, but not everyone is invited to the Met Ball.

It was specially made for Sandra Jarva Weiss, the wife of Daniel Weiss, President of the Metropolitan Museum of Art, and refers to this year’s theme: “Heavenly Bodies: Fashion and the Catholic Imagination”.

The pattern reminded Mrs. Jarva Weiss of lead glass, similar to stained glass, but without color, and the abseiling references to details on the priests’ robes. The neckline is also subtly reminiscent of a cross.

At Ms. Jarva Weiss’ final adaptation, two weeks before the event, the dress was draped on a paisley armchair, on which Mrs. Ekimian knits and has watched two mourning doves incubate their eggs in a nest on their windowsill for weeks. They slipped the week she constructed the final garment. The scene conjures up a fairy tale, but Mrs. Ekimian is not a princess who patiently waits for life. She is always up to date.

“Unstoppable,” “passionate,” “independent,” and “talented” are all words that Ms. Jarva Weiss, attorney at a Midtown law firm, used to describe Ms. Ekimian in just a few minutes. “She has a very contagious spirit,” said Ms. Jarva Weiss, who asked Ms. Ekimian to create her dress earlier this year.

Ms. Ekimian, a Russian-American born in Washington, DC, who spent many years in Egypt, a self-described “hug,” exudes none of the aspiration or fear one would expect from a 19 year old bump can make the big leagues, although designing this dress isn’t her first high profile project.

Like many of her accomplishments, this came not because the opportunity arose, but because she created a door where there was none.

Through connections made while working at the Reebok store in Union Square, Ms. Ekimian met senior officials for Adidas Wrestling in 2016 and explained why women’s undershirts needed an update. “A lot of people don’t realize that female wrestlers’ thighs are so much larger in relation to the rest of their bodies,” she said.

She told them she could design a new fit. And she did.

In addition to attending Parsons (she is in her sophomore year) and creating sportswear for an international brand, Ms. Ekimian babysits, cooks at home and hosts parties. She also volunteers for the non-profit organization Beat the Streets, which helps disadvantaged youth through wrestling.

There’s no such thing as “too much,” she said, calling her busy schedule “an adrenaline rush.”

It is the kitchen that Ms. Ekimian and the Weisses brought together for the Met Gala dress. In early 2017 she was contacted via Care.com, a website that connects families and caregivers, from a woman in need of someone to help with meal preparation. This woman was Daniel Weiss’ mother, Leah. “I make a mean lasagna,” recalled Ms. Ekimian.

From there, Mrs. Jarva Weiss asked Mrs. Ekimian to line some of the curtains. “They were for 18 windows, 32 panels,” said Ms. Jarva Weiss. “Katya had her back with me in three days.” A close friendship quickly followed.

If you haven’t met Ms. Ekimian, it’s easy to believe that her life story was a thread of exaggeration, but if anything, she seems to downplay her accomplishments and occasionally spread some self-irony. “I dress like Mark Zuckerberg from the early 2000s – all hoodies and Adidas slides,” she said jokingly, but not.

In high school at Cairo American College, Ms. Ekimian made ball gowns for herself and her friends – nine gowns for her first year and seven for her sophomore year, including her own. “I kept saying yes,” she said.

For Ms. Ekimian, designing for the Met Gala is a full circle moment. As she was growing up, she followed the event online every year with her mother, Elizabeth Arrott, who is a journalist.

Before Ms. Jarva Weiss’ dress, Ms. Ekimian’s prom dress was the favorite piece of clothing she had made. It was inspired by the theme of the 2015 Met Gala: “China: Through the Mirror”. “It was a floor-length silk brocade dress with a red and gold dragon print,” she said.

Egypt is the perfect place to learn to sew, said self-taught woman Ekimian. “Cloth was so cheap and there was so much that I just started throwing things out.”

And no material was taboo.

She once made a dress out of Dum Dum’s lollipop wrappers she’d collected in a classroom. When she needed more to finish, she called the Dum Dums factory. “Can you send me discarded wrappers?” She asked. They sent her the ends of the coils for free. “It’s so easy to call someone,” she said.

On May 7th, her dress will make its red carpet debut at one of the world’s most scrutinized fashion events.

When asked how luck had contributed to her success, Ms. Ekimian paused before mentioning a version of a quote from Louis Pasteur that her grandfather loved: “Chance favors the prepared mind.”

“Yes, I always try to have a prepared mind,” she said.