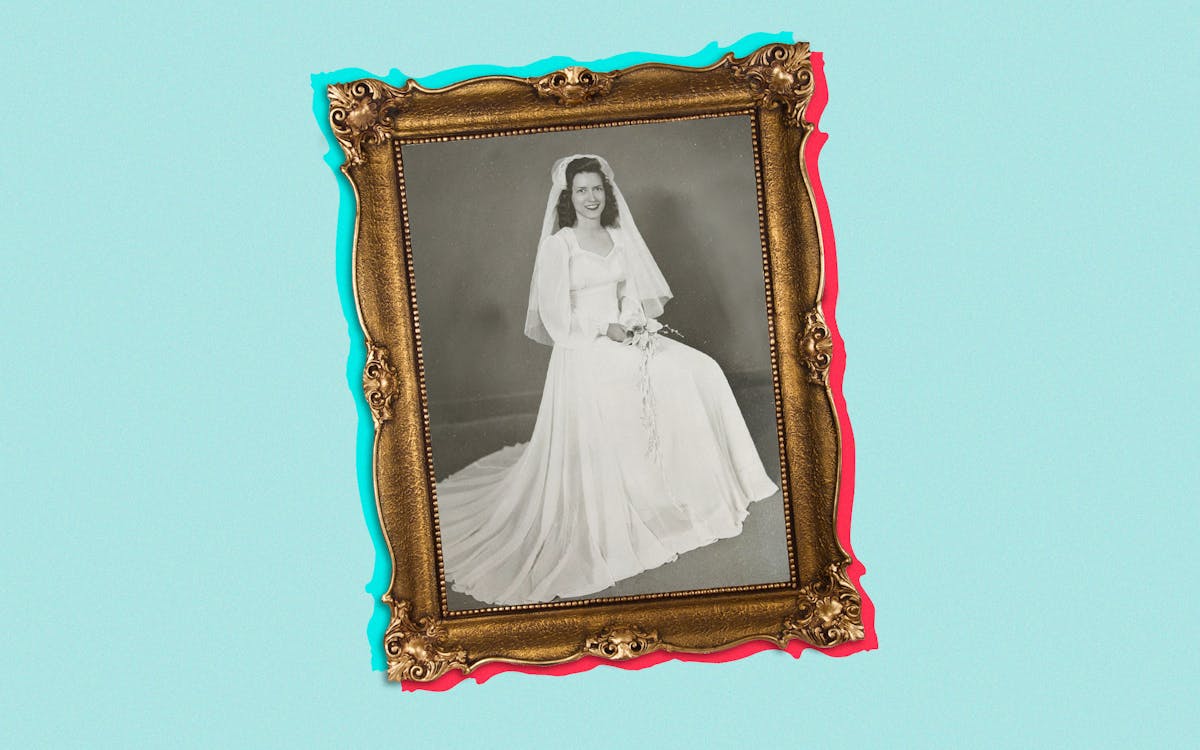 The garage has always been my husband’s domain. It’s his place in our South Austin home, and he’s outfitted it with a TV for watching games, a stereo for noisy late nights, and a mirror from the Eagle Rare Bourbon Bar. But after moving my 71-year-old mother to an assisted living facility last year, I had to empty her house in Kyle – which was filled with both her belongings and those of my grandmother June, who died in 2016 with photos, slides, letters and other ephemera soon filled my husband’s room. I began to refer to this collection as a family museum. The museum smelled like my grandmother June: a mix of True 100s cigarettes, Chanel No. 5 Eau de Toilette Spray (which she called “toilet water”), and Dorothy Gray Satura moisturizer.

When I was sorting my mother’s things that were falling back and forth between my son’s bike and the flat screen TV, A real estate sales liquidator was at my mother’s house setting the prices for the things I could sell. These were the items I wouldn’t keep – items that feel right at home but can be found at almost every real estate sale in Texas: Corning ware from the 1970s with blue flowers, pottery bought in border towns on tipsy day trips Christmas decorations, rotary phones, seashells collected from walks along the Gulf Coast, books, root candles, raincoats, mason jars, a rake, shovel, and boxes of tiny plastic drawers full of loose nails and screws. When I moved into my first apartment, my grandmother June taught me how to search property sales for furniture, decor, and kitchen appliances. She taught me to scan inventory on the first day of the sale and buy everything I couldn’t live without, but also to keep a few items and return on the last day of the sale at discounted prices. She taught me that part of the fun of shopping real estate sales is getting a look at the house, especially when we went to the real estate sales of renowned artists and architects in San Antonio, where June lived. What she didn’t teach me during those buying dates in the late 1990s to early 2000s was what it’s like to be on the other side of a property sale when you’re not the buyer. When you empty your family’s home it can be bittersweet.

Every time I went to my mother’s house during the pre-sale professional sorting, staging, and pricing process, her once cozy home – “Grandma’s House” to my son – looked more like a retail store. The liquidator McKenna Kuhr placed tables with Christmas decorations against a living room wall. The kitchen counter looked like a busy Williams Sonoma display. the garage like the Lowe’s Garden Center. Just seeing the trash of life categorized and organized, loosened up and dusted off was both satisfying and shocking, and after all, every bit in my family’s life had a price. I processed the grief through journaling, late-night conversations with my husband, and texts with friends. “I think it’s weird selling my grandmother’s 1940’s wedding dress when I don’t need it,” I typed in one of my group chats. “We had a day sale for my grandparents’ things,” replied a dear friend. “It’s strange, people going through, throwing away offers and doing things on their backs.”

Then the first day of my mother’s estate sale came along with a text message from Kuhr: “SLAMMED! 25 people in line, 10 inside. “She called me to debrief later that night: Mom’s neighbor had bought the heavy vintage stainless steel toaster that my husband called The Buick. Two women waited in line for an hour to buy the plastic drawers with screws and nails in the garage. One man bought all three dial phones. One woman bought $ 300 worth of Christmas decorations and said she would return on Sunday to buy more at a discount.

June loved selling real estate and had hoped hers would be good; in this iteration – her belongings went like hot cakes while her daughter’s home sale – it was. Stagnant articles delighted every buyer. I imagined people taking photos of their treasures, making room for these new finds, sending boastful, jealous texts to friends, and being glad they went on this estate sale.

At the same time, I felt hollow knowing buyers were leaving with pieces of my family history. The thought of selling my grandmother’s Duncan Phyfe dining table, along with its chairs and leaf extension, that I’d devoured Christmas dinner sitting next to my second cousins, wore me out. Then I got some oddly satisfying news from Kuhr: my grandmother’s pearl wedding dress from 1945 was sold to Reagan Wells. Wells, who uses @reaganretro on social media, planned to turn my family’s story into a cutting edge history lesson for her 37,000+ followers on TikTok.

This was an unfamiliar app to me. Sure, I’d seen the viral video of the guy drinking cranberry juice while skating to Fleetwood Mac, and I’d seen friends share this ubiquitous TikTok Baked Feta Noodle Recipe. But I had no other idea. Kuhr told me that Wells was one of her favorite young customers who “always knows when I have nice vintage pieces”. Not only had she bought my grandmother’s wedding dress, but also the very fluffy lace dress that my mother wore as a bride in 1972. I went into the garage, rummaged in the family museum, and found bridal photos of both women. I sent snapshots of the portraits to Kuhr to share with Wells.

I learned that Wells took classes at Austin Community College and applied to a four year university to study art history. She collects vintage artifacts to preserve and learn their stories, which she then shares in her fashion history focused report. My grandmother June isn’t even the only 1940s University of Texas student whose vintage clothing Wells bought. It gave me pleasure to think of a freshman – happened to be at the school I teach English – who connects to history through objects worn by women who attended universities in Texas during World War II.

Weeks after Wells bought both dresses and posted them on TikTok, I finally caught up with Kuhr and got Wells’ TikTok handle. I put my laptop on the couch, sat next to my husband, and gave in to another social media app. I created my own TikTok account not to post videos but to follow accounts, including yours. Immediately I saw my mother and grandmother in their video grid, covering the faces in their bridal photos with flowers to create an aura of privacy. I clicked on my mother’s floral face first. “Everything is bigger in Texas,” Wells signed this video, alluding to the sheer amount of lace that was used to make my mother’s dress. As the opening bars of The Supremes’ “Where Did Our Love Go” filled my tiny laptop speakers, I saw Mom’s bride portrait in the first picture before it hit Wells, who wore the dress in her own house. She pointed out the details of the garment – the original net flower veil, the volume of the skirt and the stains.

I had never known my mother as anyone other than mom. As far as I know, she had never tried her wedding dress on after the big day, and I certainly never saw her take it out of her closet. Now if we see Wells giving us the front view of the dress, then do a half-turn to show the back view and then walk away from the camera a little. Say yes to the dress style, I saw my mother’s dress move for the dress first time. I imagined how she must have felt in 1972 as she started a new life as a young bride. During a visit to her supervised dormitory a few days later, I showed mom her portrait of the bride. “La Feria,” she said and the clarity broke the cloud of dementia. Moments before I had reminded her what day it was. “I am sorry?” I asked. “La Feria,” she replied with a smile. “I got the dress there. It was a shop in San Antonio. Downtown.”

Back on the couch, with my laptop open, and after watching Reagan spin and take a few catwalk steps in Mom’s wedding dress, I needed an emotional break. I watched another of Reagan’s videos, a “Is it vintage or not?” Explainer showing off a purse and guiding the audience through her vintage hunting process. “She’s a clothing nerd and got my mother and grandmother’s clothes,” I said aloud to my husband. “These clothes have found the best home.”

My husband and I next watched Reagan’s video of my grandmother’s dress. This time the soundtrack was Glenn Miller’s “Moonlight Serenade,” a song I knew June loved. There were no stains on this dress, no pouf space to joke about, no zipper – just a side hook closure and pearl detailing on both the top and the veil. The video had generated a lot of comments, from “OMG, I’m crying, this is breathtaking” to speculation about what a 1945 bride would have worn under her clothes.

There it was: June’s wedding dress, out there on the internet for public consumption. June was a chemistry teacher, a teacher herself, and now Wells was on my laptop screen, sharing vintage clothing with her followers. Letting go of life as I knew it a year ago – knickknacks that weren’t neatly arranged on the shelves in my mother’s house – was difficult. But these TikToks and the ongoing project to sort and archive the family museum are the ointment.