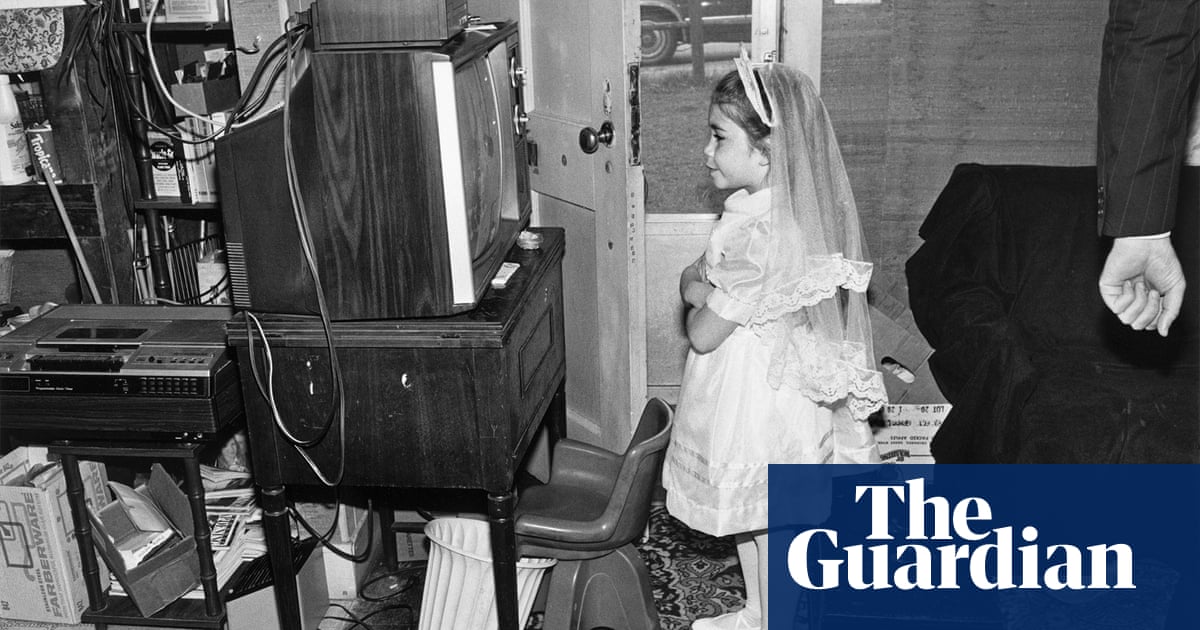 T.His photo was easy because this is my niece preparing for her first communion. Your normal state should be very active, never stationary for more than a minute. She would be wearing a t-shirt and probably be out in the dirt. What I see in this picture is that she was told to be good, stand still and not mess her dress.

It was 1987 and the family lived in Stoughton, Massachusetts. It’s a blue collar area, not particularly fancy. Children always played outside, which was not seen that often in more affluent areas. There was a lot of excitement. First communion is a very big thing. The rationale is that the girls become brides of Christ, so their outfits are like a wedding dress, and the boys wear white suits, white shirts, and white ties. You are seven years old and are considered old enough to have a conception of sin. My niece must have just turned 40.

Her grandmother, who also lived there, was very pious, as was her uncle – that’s his fist on the right. My niece did the cartoons and tried not to think about the whole communion thing. To me, she looks like she isn’t keen on it at all. She was very spirited and looks a little impatient, a little annoyed – but it’s only one day and she will try to get through.

If I saw a likely prospect I would tell my friend to go. He got used to it.

The TV and stereo really date this photo. Another thing about the picture – and others of mine – is that there is quite a bit of clutter. I’m sure some people cleaned up before I got here, but I think they just let it go most of the time. I loved this because it helped tell the story about the people and their lives in that room. And besides, I loved it because I grew up in such a different house where everything had to be put away once you stopped using it. As if you’ve never been there, like all signs of your activity have been erased.

I’m not the least bit attracted to photographing celebrities. I think they are already adequately covered. The people I shot for At Home, my photo book project, are very real. There are stories to tell there. When you photograph a family in their own home, let go of their guard. Once you have this invitation, there is no need to constantly negotiate to get a picture. You’re done.

I would look for people to photograph. I would see someone and feel like I had to ask. Maybe I liked their faces or how they interacted with their children. A lot of people refused or looked at me like I was crazy. I wanted to ask others so badly, but couldn’t muster up my nerve. If I saw a likely prospect, I would tell my friend to leave because I thought I was less of a threat on my own. He got used to it.

I never knew what kind of shot I was going to take. I hadn’t preconceived anything. I could tell someone not to have to smile, but that was about as straightforward as it got. I would just take hold of the moments. This was one of about six rolls of film that I shot with my Leica rangefinder camera that day. I would tend to do a lot of film – mostly because I’m just excited.

Some of the families I shot became my friends. When I injured my back and couldn’t work for a few months, a mother let me know that if I lost my home, I could stay with them. That blew me away. In other cases, people started arguing or there was significant tension and I had to leave the session. I remember doing a session on a bitterly cold day that just didn’t happen – even the dog was stiff. I went back to my car and found that the locks and doors were frozen in place. I had to go back to the family and ask for help.

Photographing people at home is so different from photographing them outside. A house reflects who someone really is so well. But I look forward to getting out of my house now. I will be vaccinated next week. There’s a big world out there – and it’ll be great to get back in.

“There’s a big world out there” … Susan Kandel.

Born: Washington, DC, 1949
Educated: Massachusetts College of Art
Influences: “Lee Friedlander and Garry Winogrand are high on the list. Also my teachers Tod Papageorge and Nick Nixon. ”
High point: “I took one of my photographs in the Pleasures and Horrors of Home Comforts exhibition at the Museum of Modern Art.”
Low point: “Keep the lens cap on while photographing a wedding. Only one roll of film, but that’s bad enough! ”
Top tip: “Take all opportunities – and don’t be prejudiced.”

Susan Kandels At Home is published by Stanley / Barker.